A user arrived the other day in a state of some perplexity. She was using the OSCOLA style, and the punctuation between the place published (a colon) and the publisher vanished, as did the comma after the publisher and before the date:

Ramsey I T, On Being Sure in Religion (London Athlone Press 1963)

The style, however, was set up to deliver the required punctuation marks, however.

My fiddling drew a blank, and so I was forced to retire to my desk to ponder further. Eventually, I found what was going on, although admittedly, I have no idea why. It turned out that the publisher and the place published fields in the reference itself had a blank space at the end.

So, instead of being ‘London’ the entry was ‘London ‘.

The removal of the white space at the end of the entry restored the colon and comma:

Ramsey I T, On Being Sure in Religion (London: Athlone Press, 1963)

Which just goes to show that when strange things happen, sometimes it is the fault of the data, rather than the style, although I cannot see why a bit of cunning string handling and slicing could not sort this issue.

As Endnote Web (or Endnote Online, or Endnote Basic, or whatever it is being called this week) is evolving fairly rapidly, it is probably time to have another look at linking your endnote desktop and Endnote Web libraries.

This is done from Endnote desktop, from Edit | Preferences | Sync. 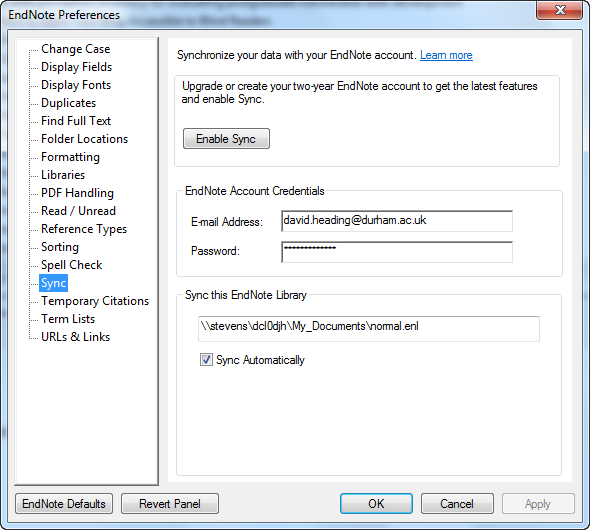 You will need to enter your Endnote Web credentials (set up from the My Endnote Web page. The system will then transfer records between your Endnote libraries (the one on your desktop and the one in Endnote Web) and keep them both up to date.

Be warned. The first time this is done it can be slow, however.
Posted by The Polemarch at 02:00 No comments:

It seems to me that competition is heating up between the different reference managers that are available. I am seeing more people using Zotero and Mendeley, although Endnote is still the weapon of choice for most people. However, the other two products are free, at least if you do not need the extra storage space available for a price.

To consider Mendeley first, I confess that I have never got on with it very well. The interface into Word has been cleaned up significantly and it does work, but except for Science Direct I have not been very successful in capturing online papers and other references, for example from JSTOR. Perhaps it is just me.

The other thing which people do object to with Mendeley is that, in April 2013, it was brought by Elsevier, the publishers. Firstly, the question that springs to mind is “why?” According to this article, it is to gain access to the data flows of all the article sharing and groups and so on that the social media side of the product produces. That, of course, is modern business for you, but you might object to your data being used in this way.

The downside of the sharing ability is, of course, the potential breach in copyright. Indeed, the article referred to above notes that Elsevier were one of the protagonists in trying to stop PDF sharing, so that every researcher had to buy their own copy from the publisher. The pros and cons of this are, of course, arguable, but breaching copyright is actually illegal.

Next up is Zotero, which has improved radically over the last few years (i.e. since I last looked). The desktop version works nicely and (once I found the tools) the integration into Word seems fine (the tools are on the Word ‘Add-ins’ menu, but not named as Zotero, at least on my installation. Again, Zotero offers some social networking ability, although I confess I have not explored it as yet.

Finally, we come to the stalwart package of the field, Endnote. This is costly (at least in comparison to the others) and proprietary, although this does not mean that you are committed to using Endnote for evermore, as some people seem to think. All of these packages are interoperable, to a greater or lesser extent, although, annoyingly, some struggle to transfer attached PDFs (I’m still looking into it). Endnote is probably the most powerful, in that if the exact reference style you need is not available, you can modify one, which is not, so far as I can tell, available in either Zotero or Mendeley, at least without a great deal of blood, sweat, and XML.

Of course, with power and flexibility comes complexity, and Endnote is probably the most difficult of the packages to come to terms with. It also has an online version, which is developing rapidly (and rather confusingly) at present, but does not have social networking ability (at least, as yet).

So, there you, you pays your money (or not) and you takes your choice. As I mentioned, Mendeley would not do the things I wanted it to, and so I can’t recommend it. Zotero and Endnote seem to be converging to similar sorts of solutions, so far as I can tell.

Anyway, don’t take my work for it. A useful comparison can be found here: http://blogs.lse.ac.uk/impactofsocialsciences/2012/11/23/harries-referencing-tools/

Endnote vs The Rest

There is an interesting post here about using Endnote (or not):

together with a lengthy discussion in the comments.

Endnote seems to have a bad reputation for occasionally messing up long documents, leaving a 'references-off-by-one' error, which is referred to int he post and comments.

I have not ever seen this error, so could anyone who does experience it let me know, please? Anecdotal evidence suggests that it happens when a long document scan for citations is cancelled, but I have not managed to reproduce it.

Aside from that, one of the outcomes of the discussion is that choice of reference management software is highly personal.

And finally, I have to add that lots of people do complete their theses happily while using Endnote....
Posted by The Polemarch at 02:00 No comments:

One of the most popular posts on this blog is the one about the error “Invalid Class String”.

This usually happens when you are running Word as an administrator and Endnote as a user.

Thompson have kindly rearranged their web site, so the link to the FAQ in the original post (http://durhamendnote.blogspot.co.uk/2012/05/invalid-class-string.html) is not incorrect.

The address you now need is this: http://endnote.com/support/faqs/endnote

No sooner did Endnote X7 appear, than there was a patch.

The patch also uses a new feature of Endnote X7, in that it launches automatically when the update is detected, and installs itself.

The update arrived last week. You can skip it, but the pop-up may well return the next time you open Endnote. In order to avoid it keeping popping up, you need to click on ‘skip this version’. If you use ‘cancel’ it will reappear next time.

You also need administrator rights to install it, so it could become a nuisance for those without such rights (of course, that may be part of the point; updates are good things, in general).

Sometimes, the plain reference will just not do. Someone asked me recently about a work which was by a set of authors, but had a bit inserted in it by someone else. The plain reference (Smith et al (1991) p. 42) simply would not do, but then nor would (Jones (1991) p. 42), as that is almost equally misleading.

How do you handle these issues?

There are two ways you can, in fact, deal with these items. Inevitably, there is a complex way, and a simple way. Unless this sort of thing happens a lot to you, I commend the simple way.

Suppose I wish to add the word ‘see’ to the beginning of it. If I click on Edit & Manage Citations from the Citations group of the Endnote tab, I get the dialog box: 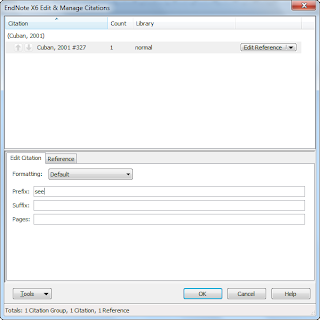 I can add the text I wish to appear before the citation to the Prefix box:

I need to remember to add the space as well.